Copyright: ©2016 Rastogi R, et al. This is an open-access article distributed under the terms of the Creative Commons Attribution License, which permits unrestricted use, distribution, and reproduction in any medium, provided the original author and source are credited.

Meningitis is a frequent cause of morbidity and mortality in pediatric age-group with pyogenic cases outnumbering other etiologies especially in the Indian subcontinent. Though the diagnosis of meningitis is usually made on clinical and CSF examination yet imaging is often required to rule out focal lesions, hydrocephalus and other complications or when clinical examination is equivocal. Rarely, initial imaging may be normal or may suggest another diagnosis leading to clinicoradiological discordance making further detailed evaluation imperative. Hence, in this article, we present a rare case of pyogenic meningitis that mimicked leukodystrophy on initial imaging with unusual presentation on detailed imaging.

Meningitis is a frequent neurological cause of morbidity and mortality worldwide including Indian subcontinent [1]. Among the various etiologies, pyogenic type is the most predominant. Despite clinical diagnosis, imaging is often required to rule out coexisting focal lesions; detection and extent of other complications or when clinical diagnosis is in doubt [1]. In majority of cases, plain or non-contrast computed tomography (NCCT) or contrast-enhanced computed tomography (CECT) brain is the initial and only imaging studies required with latter involving intravenous contrast injection allowing detection of areas with breach in blood brain barrier. However, in difficult cases magnetic resonance imaging (MRI) brain or contrastenhanced MRI (CEMRI) is preferred as a problem solving tool with latter involving intravenous contrast injection and delineates area of breach in blood brain barrier. This article describes unusual form of pyogenic meningitis associated with septic vasculitis and infarcts where NCCT brain mimicked leukodystrophy and contrast-enhanced MRI (CEMRI) revealed signs of unusual meningitis. In usual form, there may be leptomeningeal enhancement or basilar exudate enhancement but in unusual form which is more severe, meningitis leads to septic vasculitis leading to necrosis of vessel wall and luminal thrombus formation and subsequent infarction. 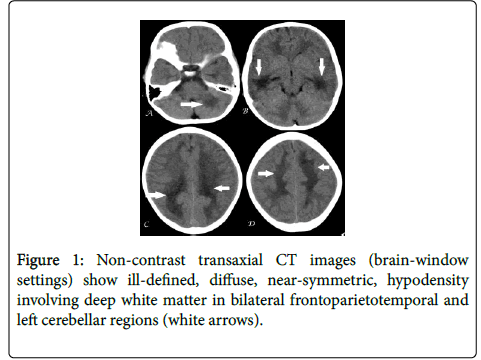 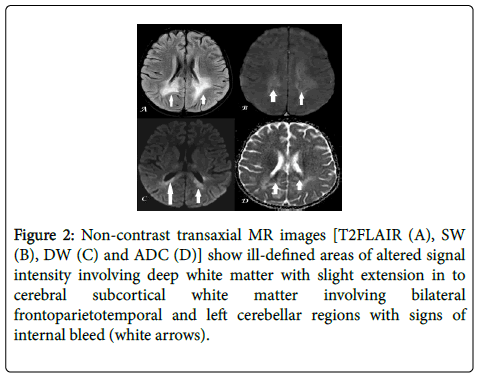 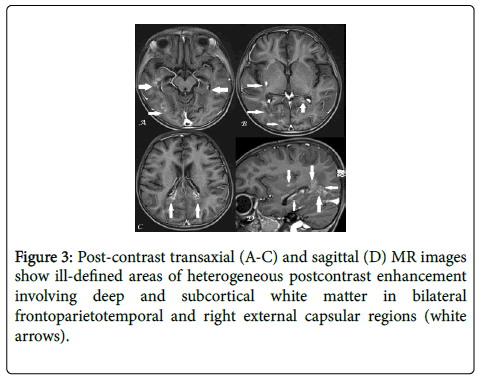 Based on the clinicoradiological findings, intensive intravenous antibiotic therapy with 100 mg/kg body wt/day of ceftriaxone was initiated for 14 days and a good clinical response was achieved. The patient was then discharged on oral antibiotics (cefixime 8 mg/kg body wt) for 07 days and was found to be clinically normal on 4 and 8 weeks follow-up.

Pyogenic meningitis is one of the severe causes of neurological impairment during infancy and childhood. The diagnosis is mainly based on clinical findings and CSF analysis. However, imaging is indicated for evaluation of severe complications including hydrocephalus; cerebritis or abscess formation; cranial nerve inflammation/palsy; arterial or venous thrombosis/vasculitis causing infarcts; ventriculitis/ependymitis and subdural collections requiring urgent attention and treatment [1]. Imaging is also indicated when the clinical diagnosis and CSF findings are equivocal. Septic vasculitis which leads to small cortical gray and deep white matter infarcts may lead to permanent tissue damage resulting in increased morbidity and mortality making early diagnosis and treatment imperative [2].

CEMRI brain is superior to CECT brain in detecting and monitoring complications of pyogenic meningitis [1]. Diffusionweighted images (DWI) along with magnetic resonance spectroscopy (MRS) are especially helpful in differentiating pyogenic abscess from other etiologies [1]. DWI images are very useful in detecting and monitoring infarcts secondary to septic vasculitis which are difficult to detect on CECT images as subtle hypodensity secondary to acute ischemia is difficult to detect in normal-appearing hypodense white matter [2]. When these septic-vasculitis induced infarcts show diffuse and near-symmetric involvement of white matter, they mimic leukodystrophy as seen in our case creating a diagnostic dilemma.

Septic-vasculitis and induced-infarcts usually show rim or heterogeneous enhancement secondary to vessel wall and adjacent meningeal enhancement but their recognition is equally important in the unusual cases of only white matter involvement with lack of meningeal enhancement as seen in our case [3,4]. When septic vasculitis involves the ventricular lining, it may lead to ventriculitis/ ependymitis with presence of fluid-fluid level in ventricular lumen being a specific sign [5].

Septic-vasculitis induced cerebral infarcts are a significant cause of morbidity and mortality in cases of pyogenic meningitis with CECT brain being initial while CEMRI being gold-standard imaging investigation. CT brain findings may rarely mimic leukodystrophy in cases of diffuse, near-symmetric, cerebral and cerebellar white matter infarcts. CEMRI should be considered as first imaging investigation whenever, clinical and CSF findings are discordant.