Aerobics & Fitness
Make the best use of Scientific Research and information from our 700+ peer reviewed, Open Access Journals that operates with the help of 50,000+ Editorial Board Members and esteemed reviewers and 1000+ Scientific associations in Medical, Clinical, Pharmaceutical, Engineering, Technology and Management Fields.
Meet Inspiring Speakers and Experts at our 3000+ Global Conferenceseries Events with over 600+ Conferences, 1200+ Symposiums and 1200+ Workshops on Medical, Pharma, Engineering, Science, Technology and Business

Copyright: © 2016 Cox CDMS, et al. This is an open-access article distributed under the terms of the Creative Commons Attribution License, which permits unrestricted use, distribution, and reproduction in any medium, provided the original author and source are credited.

Aerobic exercise has two primary benefits for people with type 2 diabetes (T2D): 1) It temporarily reduces insulin resistance up to 48 hours, and 2) It lowers blood glucose (BG) even in the absence of effective insulin action [1]. Therefore, a dose of exercise should indirectly lower BG by reducing insulin resistance. Exercising after meals while BG is rising should directly lower postprandial glucose (PPG), a primary contributor to glycosylated hemoglobin [2] and a risk factor for cardiovascular disease [3]. The only exercise guidelines given in the ADA’s 2012 Position Statement [4] on the management of T2D were, “As much physical activity as possible should be promoted, ideally aiming for at least 150 min/week of moderate activity including aerobic, resistance, and flexibility training”.

DiPietro [5] demonstrated that 45 minutes of aerobic walking, whether done in three 15-minute bouts after meals or in a single dose, similarly and significantly lowered 24-hour BG among adults at risk for developing T2D. Aerobic walking performed after meals, however, led to significantly lower postprandial BG. Not only is the type and timing of exercise important, but compliance among individuals with T2D is also critical. It may be that doing several 15-minute bouts of postprandial exercise is preferable to a single 45-minute block.

This pilot study replicated DiPietro’s hospital-based investigation and extended it to include: 1) Adults with T2D, 2) During their daily routine, 3) While documenting personal preference for and performance of the two types of physical activity. Both studies incorporated a cross-over design. Three adults participated whose ages were 64, 60, 65 years, genders were M, F, M, and BMI was 25.4, 41.2, 31.2 respectively. They were all diagnosed with T2D within the last 5 years and were not taking diabetes medication. Data collection occurred only after subjects signed a consent form approved by the University of Virginia ethics committee. In the study, they performed self-monitoring of blood glucose (SMBG) before meals, two hours after meals and at bedtime. This was done for four consecutive days (days 1-2 were controls and 3-4 were experimental days), for each of three conditions presented in a randomized order (12 days total). The 2 control days were important since aerobic activity can impact insulin resistance for up to 48 hours [6]. On the control days, a maximum of 6,000 steps and 100 aerobic steps (quantified by HJ-323U Multi- Function Downloadable Pedometer) was required so as to not influence the experimental days (days 3-4). The three experimental conditions implemented during days 3-4 were: 1) the Sedentary condition, wheresubjects restricted aerobic walking to a maximum of 6,000 steps and 100 aerobic steps, 2) the 15-PPG condition, where subjects performed 15 minutes of aerobic walking (>108 steps/min) starting 30 minutes after each of three daily meals, and 3) the 45-Block condition, where subjects performed 45 minutes of continuous aerobic walking two hours or more after starting their evening meal. To ensure stability in the three test conditions, BG was averaged over days 3-4, SMBG (as measured with a Verio IQ meter, LifeScan Inc.) was measured twice and averaged at each of the seven daily measurement points, and subjects were asked to eat the same meals during all experimental days. The latter was confirmed with 24 hours ASA dietary recall [7].

One month following the intervention, subjects were telephoned and asked which exercise format they preferred, and how much and when they walked aerobically in the previous seven days.

For the Sedentary, 15-PPG and 45-Block conditions, subjects averaged 0, 45.6, and 46.5 min/day of aerobic walking respectively, affirming the experimental manipulation. With 28 SMBG readings/ subject (2 days X 7 readings X 2 SMBG/reading), mean BG for the Sedentary, 15-PPG and 45-Block conditions was 123.8, 109.9 and 109.0 mg/dl respectively, reflecting extremely good metabolic control for T2D patients not taking diabetes medication. Mean PPG averaged across the two experimental days and three meals was 142.3, 114.7 and 119.90 mg/dl for the sedentary, 15-PPG and 45-Block conditions respectively. The respective mean pre to post BG change was 35.3, 3.1, and 18.5 mg/dl (Figure 1). At one month follow-up, all subjects reported preferring 15-PPG over 45-Block exercise, and performing an estimated 495 minutes of block and 555 minutes of postprandial aerobic walking during the previous week. 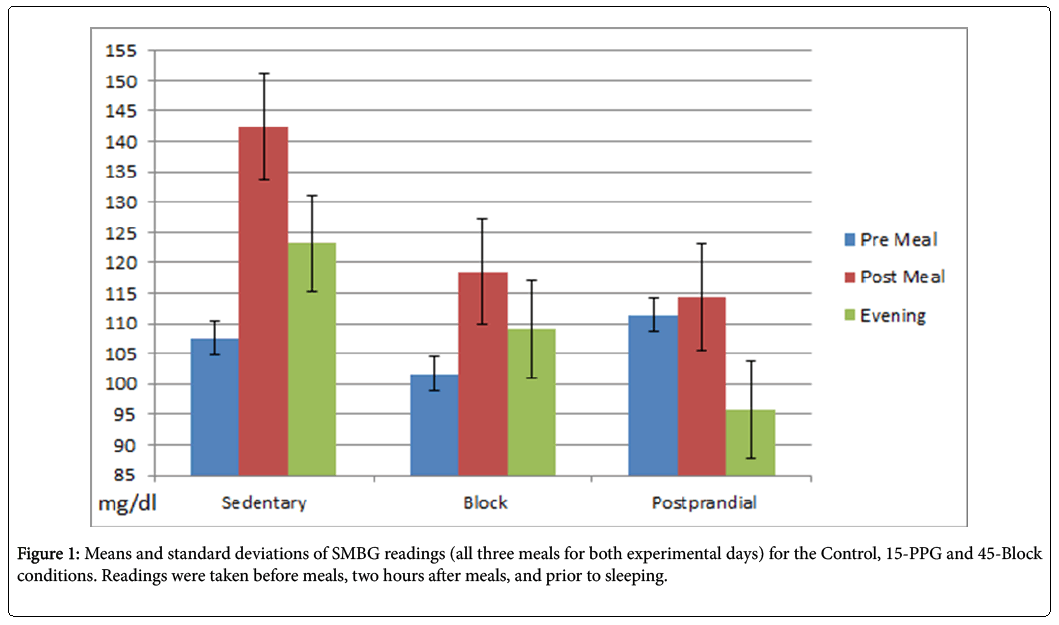 Figure 1: Means and standard deviations of SMBG readings (all three meals for both experimental days) for the Control, 15-PPG and 45-Block conditions. Readings were taken before meals, two hours after meals, and prior to sleeping.

These data confirm that adults with T2D benefit metabolically from 45 minutes/day of aerobic walking. More specifically, it indicates for the first time that individuals with T2D can lower PPG when this is broken down into three 15-minute segments after meals. Further, these individuals prefered 15-minute segments and perform more minutes of exercise when it is done in 15 minute segments rather than a block of 45 minutes. These data affirm laboratory findings [5] of pre-diabetic individuals that generally indicate post-meal aerobic walking is associated with lower post-meal SMBG readings. In conclusion, it may be more metabolically effective and behaviorally efficient to encourage those with T2D to engage daily in several brief post-meal exercise periods rather than a single, lengthy block of exercise.