Multiple Dimensions of Integrative De-Control in Permissiveness for Carcinogenesis

Copyright: © 2015, Agius LM. This is an open-access article distributed under the terms of the Creative Commons Attribution License, which permits unrestricted use, distribution, and reproduction in any medium, provided the original author and source are credited.

The overall profiles of malignant transformation events are multi-characterization of integral formulas of DNA damage that respond in highly varied manner as dictated by specific genotype dimensions. It is significant to view the overlapping of individual molecular pathways that progress as permissive players in the profile dimensions for further change. Instability of the genome accounts for the emergence of template re-characterization as formulated by increased cellular proliferation beyond the G1-S restriction point of cell cycles and also by an unstable apoptosis/ anti-apoptosis balance in individual cells. Such contexts imply switching and oscillatory patterns as consequences of multi-node de-control and as systems of favored permissiveness for further progressive change. It is further to the realization of integrative functionality and dys-functionality that consequent change is indeed the central context for malignant transformation and of subsequent emergence of spread of individual transformed cells that paradoxically contribute to multi-aggregates of such cells within overlapping networks of permissive formulations of transcriptional and receptor modulation.

A strictly defined concept of interactivity feedbacks is faithfully reflected within the contextual operability of molecular pathways that govern alternate systems of cell cycle and apoptosiscontrol. HER2 over-expression in premalignant gastric lesions may indicate involvement in early gastriccarcinogenesis [1]. Such proposed mechanics is an illustrative progression within potential events of targeting in terms that transcend the simple consequences of the ensuing events themselves. Increasing microRNA-31 significantly repressed cell proliferation, promoted apoptosis and attenuated cell migration, with also downregulation of STAT3 [2].

The significance of operations that implicate both positive and negative feedback loops are particularly relevant in terms of transcription factor effects. Multiplicity of such operations stresses such promotional consequences that range from non-linearity of pathways to the upstream outcome effects of effective end-stage result. Stimulation of growth factor effects is a strong effective outcome engine in terms of cell cycling on the one hand, and of the consequential mediation of apoptosis when such growth factor effects are suppressed.

In terms that influence modulation of events, it is with special reference of end-result formulation that there emerges alternate propositional consequences that are only partially defined by simple mechanistic influence. The complex cellular origin of liver cancer is crucial to tumor initiation and progression [3]. The transduction of multiple pathways allows not only a multiplicity of end-result but also the operational overlapping of such multi-consequence within the frameworks of upstream effect in particular. A non-linear approach, consistent with available mode of action data that utilizes non-threshold and threshold parameters may be valuable in assessing some cases of carcinogenicity [4]. In such manner, distributional feedback loops only signify the inter-communicability of essential formulations of either cell cycling or of apoptosis of individual cells.

Linkage definitions can be seen as dimensional modular function and dysfunction that intuitively appear to account for intracellular pathway communicability ranging from stimulation to suppression, especially, of control nodes that progress in terms of intra-modular and modular-modular inter-influence in carcinogenesis and cancer progression.

Inter-relative dimensions of permissive susceptibility are best exemplified by systems that overlap in consequential control, especially as translated in terms of strict quantitative influence. The intrinsic nature of complexity of positive and negative feedback loops is symptomatic of the progressive nature of carcinogenesis that promotes the transduction response of individual cells to extracellular stimuli that go beyond simple receptor concepts of stimulation or inhibition. Earlier age at menarche is recognized as a major risk factor for breast carcinogenesis, and Nrip1 knockout in mice could significantly delay female sexual maturation and inhibit growth of breast cancer cells [5].

Panoramas of dimensional influence can best be interpreted as unit formulas of consequence that implicate stimulated cell cycling and concurrent inhibition of pro-apoptosis. It is the defined nature of the cell eventualities that is significant especially when contrasted with simplistic outlines of mechanistic pathogenesis. The real terms of such consequences are realized as global formulas that implicate effectual theoretical dimensions of promotional permissiveness. In such manner, catechol-O-methyltransferase plays a central role in DNA repair and estrogen-induced carcinogenesis[6].

Performance outlines are illustrative of the qualitative and also quantitative dimensions of modulation that emerges within contexts of persistence or of transitional oscillations in specific pathway effects. FHIT is a bona fide tumor suppressor gene and its loss or methylation may contribute to breast carcinogenesis [7]. The operative dysfunctions, in particular, of interactive modulation is best viewed in terms of the accumulative quantitative effects of growth factors and of such stress formulas as induced by reactive oxygen species and of DNA molecular lesions or mutations. NOTCH1 is a critical regulator of human carcinogenesis and is involved in multiple steps of cancer development and progression [8]. The further derivative outcomes of p53, c-Myc, Nuclear Factor-kappa B and of E2F-1 as translated transcriptional control allow for a multi-series permissiveness that is consequential derivation also of cellular genotype. Antigenic stimulation via the B-cell receptor is a major driver of proliferation and survival of chronic lymphocytic leukemiacells, acting in part via translational induction of Myc [9] Figure 1. 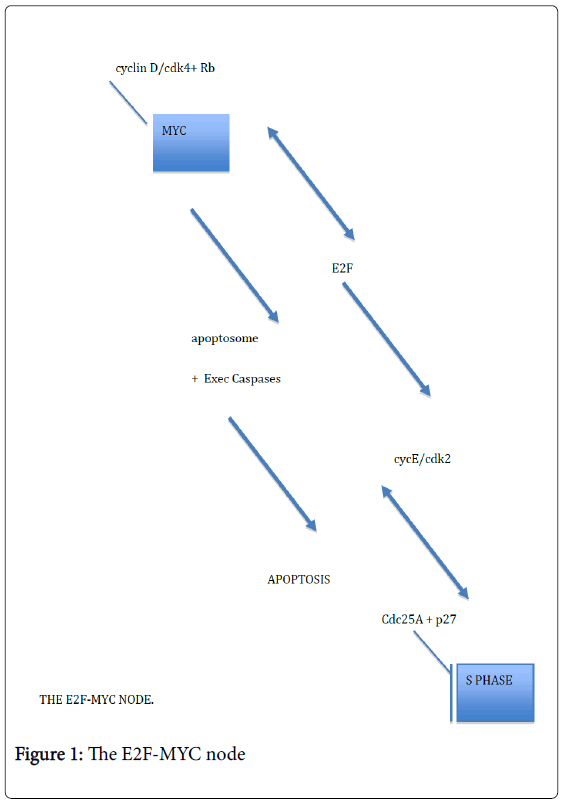 Control functionality of such molecular pathways includes also the creation of responsive events on the part of individual cells that dysfunctionally destabilize switching and oscillatory bursts of activity that transcend the dimensions of simple pathway effects and progression.

The p53 tumor suppressor activities are model templates of derivational consequence that are only be partly explained by molecular effects of potentiation or suppression. MicroRNAs appear significant regulators of carcinogenesis, and may have direct roles in survival of cancer stem-like cells that initiate and promote progression and spread of tumors [10]. The distributional subcellular dimensions of specific transcription factors also formulate the overall end-results of stress or injury to DNA. The further permissive instability of such systems as DNA repair pathways and of the mutational events of transcriptional factors such as exemplified by p53 allows for the development of emergent influences that would create instability and quantitative disturbances of transcriptional activity per se. Further promotional pathways in permissiveness rather than of loss of modular and nodal control appear especially powerful inducers of carcinogenesis as integral inducers of carcinogenesis. MicroRNAs are recognized as oncogenes or tumor suppressor genes and they negatively regulate post-transcriptional processes in development, differentiation, apoptosis and proliferation [11].

Characterization of overlapping pathways that effectively influence upstream pathways in transcription factor activities is a paramount defining unit formula in the outline specifications of end-results that may precipitate cell death or enhanced proliferative responses.

Performance dynamics come to definitively re-define in multi-dimensional manner the permissive instability of transcriptional factor operability. The specific subcellular re-distribution cycles of transcriptional factors allow for functionalities in promotional permissiveness that lead to overall consequences of genotypic multi-recharacterization in malignant transformation of cells. Cells thus effected are clonal and multi-clonal in terms of such processing that would be receptor-based and added dimensions for further modular influence. The role of the nuclear hormonereceptor peroxisome proliferator-activated receptor beta/gamma in carcinogenesis may implicate cell-context-specific mechanisms [12].

Particular significance outcome effects are traditionally interpreted as positive and negative feedback loops that oscillate or switch in terms of transcription patterns and as inhibitory profiles that induce suppression of homeostatic mechanisms. Knockdown of Bmi1, a member of the polycomb group family of proteins that governs the self-renewal of multiple types of stem cells, suppresses bladder cancer cell growth by blocking cell cycle at G1 phase and induces apoptosis [13]. The propositions for such effects are well illustrated by the patterns of quantitative differentiations of transcriptional factor effects.

Integration of varied effects is interpreted as a key formula in intuitively understanding consequences of mutational DNA lesions, as further exemplified by c-Myc and p53 profiles of interactivity. The promotional dimensions of apoptosis in particular may operate in terms also of proliferative cellular activity that go beyond simple schemes of control node influence. c-Myc operability is significant in inducing both apoptosis and also cell proliferation in a concurrently evolving profile of transcriptional activities. It is beyond such recognized dimensionality that the overall consequences in cellular characterization would lead to better integrative formulas of malignant transformation of individual cells and of multiple groups of such cells Figure 2. 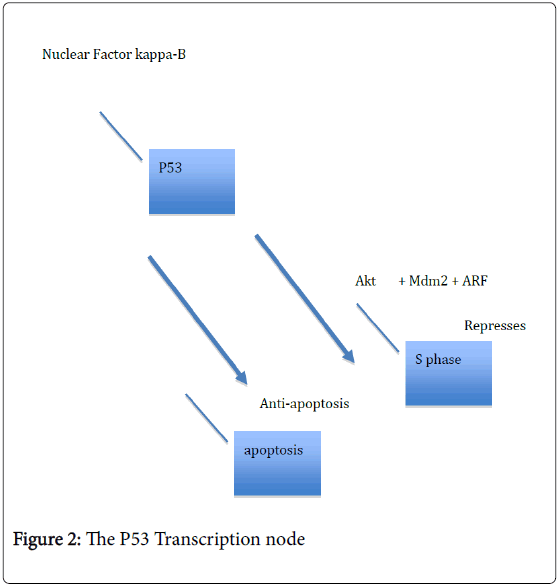 Profiles of Consequence and Permissiveness

Multi-propositional profiles of characterized over-activity of cellular events have to be interpreted in the contexts of instability of oscillations that include integral pro-apoptosis and anti-apoptosis within the same individual cell. The proposition for dimensional re-localization of transcriptional factor stimulation is particularly relevant in terms of contextual formulas for further change in pathway outcomes. A central premise appears to recognize toggle consequences that are best explained within contexts of quantity rather than of qualitative mechanisms of operative effect.

The derivative dimensions of an on-going malignant transformation would emerge as multiple steps in the redefining of characters of operability of profiles of transcriptional factor decontrol. The further formulations of receptivity of individual cells would conglomerate as network phenomena that transcend effects of single pathways. The further promotional permissiveness is particularly significant in milieu creation in terms of such processing as mutational events affecting multi-gene dysfunction, as illustrated by multi-array analyses. The significance of strict profile templates is a requisite in the outline dimensional context for further progression in malignant transformation.

Such programming of transcriptional factor performance is best represented by master-gene formulas as exemplified by c-Myc/E2F, p53, Nuclear Factor-kappa B activity. The emergence of template dimensions would lead to concurrent pathway consequence that is best realized in terms of instability or bi-stability characterization of multiple transcripts within the further promotional events of permissiveness of DNA lesion promotion and consequence.

The panorama of induced promotional and suppressive influence in pathway sequential change and effect includes the realized further transduction of multiple molecular species in response to DNA damage. In such realization, the operational dimensions for further change may include novel performing agent promotion in contexts beyond integrative dysfunctionality of individual pathway node control.